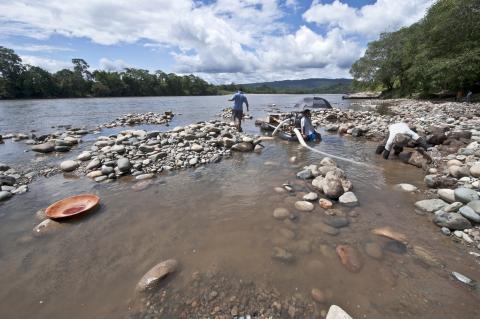 CSF completed a project to develop economic tools and incentives for reducing the ecological impacts of artisanal and small scale mining (ASM) in Ecuador. ASM is the primary method of gold extraction in Ecuador, which is Latin America’s 4th largest gold producer, and represents an important source of income for Ecuadorians. However, ASM also often leads to the destruction of stream habitats and the release of toxic heavy metals into the water system. This analysis estimated the economic effects of changing key processes in the supply chain that are responsible for most mercury emissions, focusing on costs and benefits for miners, processing plants, and the State. Using data from two key areas in Ecuador (Zaruma Portovelo y Ponce Enrique) and assuming a change towards cyanide-based processes from mercury-based ones, costs and revenues were modeled as well as the expected economic benefits from reduced mercury emissions. It was shown that by adopting cyanide-based gold separation processes, artisanal miners can increase their annual earnings by USD 40,000 while also increasing government revenue by more than USD 4 million per year. Mercury use could also be reduced by 80% resulting in health benefits of about USD 80 million per year. Recommendations on policy and regulatory frameworks were provided to the Ministry of Energy and Non-Renewable Resources and the Ministry of Environment to help incentivize better practices and relationships among economic actors.

Read about the other Targeted Scenario Analyses (TSAs) we completed in Colombia, Liberia and Paraguay.

Read the final report (in Spanish) and policy brief (in English).