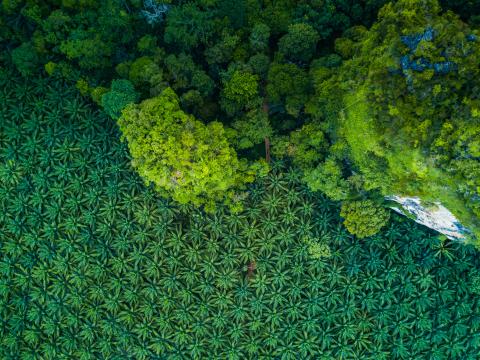 Derived from the oil palm (Elaeis guineensis, native to west and southwest Africa) palm oil is extremely versatile. It can be used as a cooking oil, converted into biofuel, and is commonly found in both food and personal care products around the world. Because of its many uses and its high oil yield compared to other plants, palm oil is increasingly in demand. Oil palms are typically grown on monoculture plantations, which are often associated with deforestation, destruction of wildlife habitat, and human rights violations.

While the vast majority of palm oil production takes place in Southeast Asia, investments and production in West Africa are growing. In 2009, Malaysian trading conglomerate, Sime Darby, signed a 63-year concession for 220,000 hectares in northwestern Liberia to develop oil palm and rubber plantations. However, facing tighter environmental regulations and pressure, Sime Darby announced in late 2019 they would divest from Liberia.

In 2020, Conservation Strategy Fund completed a Targeted Scenario Analysis (TSA) with UNDP-Liberia for palm oil in this concession, which is now owned by Mano Palm Oil Industries, a Liberian company. The study compared economic gains and losses from different possible oil palm development paths, namely conventional plantation development (the business as usual, or BAU scenario) and smallholder-centered development that complies with the Roundtable on Sustainable Palm Oil (RSPO) standards (the Sustainable Palm Oil, or SPO scenario).

Considering both overall economic value generated and environmental impacts, the analysis demonstrated that concession development that prioritizes smallholder producers and environmental sustainability, the SPO scenario is in the best interest of both the concessionaire as well as the Liberian economy. Specifically, (1) including sustainable palm oil in national policy is sound economic policy, offering substantially greater total value than the BAU scenario; and (2) the SPO scenario maintains significantly more hectares of forest than the BAU scenarios and avoids substantial carbon emissions from forest conversion.

Read about the TSAs we have completed in Ecuador,  Paraguay, and Colombia.