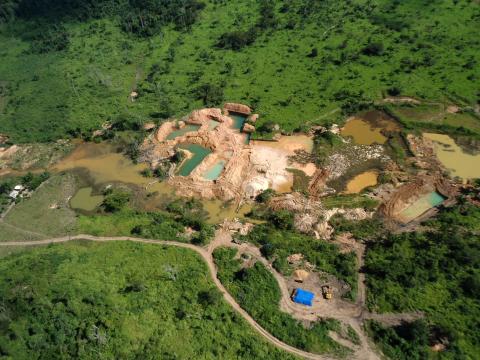 Illegal artisanal and small-scale gold mining (ASGM) poses a significant threat to ecosystems around the world, and perhaps most urgently, the Amazon biomes. The threat is not only due to the deforestation and degradation caused by the industry but from the use of mercury to amalgamate gold, which then seeps into both surface and subway waterways, poisoning the water and entering the local food chain via fish.

ASGM is the largest source of anthropogenic mercury emissions in the world, releasing the toxic substance into the atmosphere, soil and surrounding bodies of water. Illegal gold mining has grown in the last decade, fostered by a sustained rise in international prices for this metal. In countries such as Brazil, Colombia, Bolivia, and Peru, alluvial and land-based mining pollutes rivers and streams. National statistics reveal alarming rates of mercury poisoning among indigenous groups and local populations; a problem that is not fully assessed, given that many of the contaminated fish species are also consumed by regions outside the Amazon biome.

Conservation Strategy Fund, in partnership with FCDS, is working to bolster the capacity of Brazil, Colombia and Peru institutions to assess the socioeconomic and environmental impacts of gold mining. This will be done through the use of economic tools including the Mining Impacts Calculator already designed for Brazil as part of our partnership with the Brazilian Federal Public Prosecutor's Office (MPF). The tool allows users to calculate the average socio-environmental costs of illegal gold mining activities. After a successful launch in Brazil, our adaptation of this calculator will provide Colombia and Peru an easy-to-use, evidence-based tool for reliable economic information. The calculator will support better decision-making, raise awareness of the impacts associated with ASGM and will inform the enforcement of regulations against illegal activities in the sector.

With this Mining Impacts Calculator, CSF will assess the socioeconomic and environmental monetary impacts of gold mining in Brazil, Columbia and Peru. The provision of robust economic information plays a key role in engaging stakeholders and decision-makers and building awareness of the true costs and benefits of promoting sustainable policies. We hope to build the capacity of key stakeholders in the three countries from the environmental sector (relevant ministers of environment, local environmental authorities, environmental defenders), and local social organizations.

Assessing the impacts of ASGM and calculating a monetary value for these impacts allows for strengthened policies, raises visibility of the issues for the general public and communities affected by mining, and encourages investments in the prevention and the remediation of harmful impacts on the environment and local communities.

This project is funded by the World Bank and being implemented in partnership with La Fundación para la Conservación y el Desarrollo Sostenible (FCDS).