On Sep 13, 2021, Piensa Verde promoted its first “Green Carpet” concert event (“Alfombra Verde Respira”) to bring together Bolivian celebrities, the press, and the public to raise support for the protection of Bolivian forests through a night of fashion, fun, and music.

The beautiful Gran Hotel Cochabamba, which served as the venue for the Green Carpet event and concert, hosted a parade of Bolivian media personalities, such as the former Miss Universe of Bolivia, Lenka Nemer, former Miss Bolivia and designer, Liliana Castellanos, musical artists, such as Matamba, Bonny Lovy, Chila Jatun, and Maria Juana, and filmmaker, Rodrigo Bellott. In addition, the event was well attended by members of the Bolivian government, including Ivan Arias, the Mayor of La Paz, Eva Copa, the Mayor of El Alto, and Manfred Reyes, the Mayor of Cochabamba, along with several prominent business executives from Laboratorios Bagó Bolivia, Samsung, and UNIFRANZ.

As the first environmental platform of its kind in Bolivia, Piensa Verde is dedicated to advancing the conservation of Bolivia’s critical natural resources from forests and protected areas to wildlife and endangered species. Through the Green Carpet event, Piensa Verde showcased garments designed and created with recycled materials in an effort to raise funds for the prevention of future forest fires and the provision of emergency equipment for park rangers and volunteer firefighters. In addition, the event helped elevate mitigation measures aimed at curbing deforestation, combating climate change, and promoting reforestation in urban areas.

As a result, several municipalities are already introducing new measures to reforest areas of Bolivia and protect critical land. In the Municipality of La Paz, the local government has committed 20,000 seedlings to reforestation efforts and will begin planting on October 1 with the Afforestation Ceremony of the First National Sanctuary of Natural Life of the Municipality of La Paz, the Mallasa Ex-Landfill Park. Similarly, the municipal governments of El Alto, Cochabamba, and Tarija each committed to planting 100,000, 25,000 and 10,000 seedlings respectively with the help of their local communities.

The Green Carpet fundraising campaign set a landmark precedent for being the first and largest fundraising campaign in the history of Bolivia with direct participation from both public and private companies and local citizens in support of the conservation of Bolivia's forests. Of course, this event would not have been possible without the support of companies such as: Bagó Laboratories of Bolivia, Sofia, Samsung, Samuel Doria Medina Foundation, Las Loritas, Farmacias Chávez, Banco de Crédito - BCP, UNIFRANZ, Casa Real, IPAX, Banco Mercantil Santa Cruz, Flor de Caña, Hotel Cochabamba, Subaru, Unicall, the Viva Foundation and the general public.

In total, the funds raised amount to Bs. 203.191 and will be used to support the park rangers and volunteer firefighters that are currently responding to emergency situations in the San Matías Integrated Management Natural Area. The decision to support the firefighters of the San Matías region was made in large part by the non-governmental organizations (NGOs) that comprise the Technical Committee of the Piensa Verde Platform. The Committee decided to allocate resources to this region in particular, as it is currently one the most at-risk and vulnerable territories for forest fires and is considered to be a critical ecosystem, rich in biodiversity. The allocation of materials and tools to park rangers and volunteer firefighters there will be coordinated with all of the actors involved in the emergency, including the National Protected Areas Service (SERNAP), the Ministry of Environment and Water (MMAyA), and the departmental and municipal governments involved. 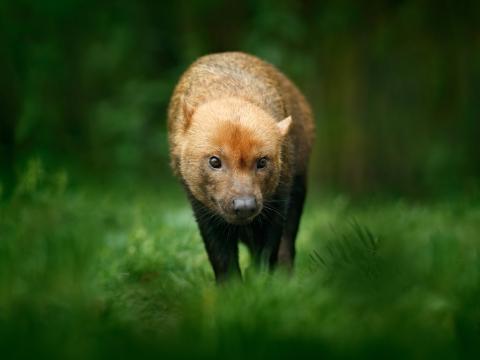 Piensa Verde: Improving Participation and Awareness for Conservation in Bolivia