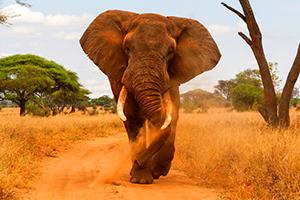 CSF and the Tanzania National Parks Authority (TANAPA) completed a contingent valuation study of tourists’ willingness to pay to visit Tanzania’s National Parks. TANAPA staff gathered more than 3,000 visitor surveys, including information from all 16 of the country’s parks. From this data, we were able to generate demand curves for each of TANAPA’s most visited parks, and understand the price-sensitivity of visitors to the less popular parks. You can read our discussion paper here.

Tanzania’s system of 16 national parks includes some of the most famous natural places on Earth, like the Serengeti and Mt. Kilimanjaro, as well as many lesser-known areas that are equally spectacular. The park system is managed by Tanzania National Parks Authority (TANAPA), and is completely funded by visitor fees. As tourism is a leading contributor to the country’s GDP, effective management of the parks system is vital for both wildlife and the country’s economy.

In 2001, TANAPA official Ezekiel Dembe attended to CSF’s international Economic Tools for Conservation course in California. After the course, CSF and TANAPA collaborated on a research project to understand park visitation in Tanzania. The project focused in particular on the potential for higher entrance fees in selected parks to both increase revenues and, at the same time, shift visitation towards some of the less well-known parks. Partly as a result of that study, TANAPA increased park fees several times, providing much-needed funds to the agency. In 2014, TANAPA’s Senior Park Warden Beatrice Kessy also attended our annual international course, which led to this study.

This project was made possible with support from the Handsel Foundation and in collaboration with Tanzania National Parks Authority (TANAPA).