I arrived in Asuncion, Paraguay very early on Tuesday morning February 4th, picked up my luggage at the airport and headed to the hotel. I was there to accompany colleagues from the United Nations Development Programme (UNDP) on a field trip to the Chaco region in the heart of Paraguay. CSF has been contracted by UNDP Paraguay to conduct a targeted scenario analysis (TSA) as a component of the Green Chaco project

The region of Chaco makes up 60% of Paraguay’s land, but holds only 10% of the population. We first traveled north to Filadelfia, the capital of the Boqueron department, a five-hour drive from Asuncion. This department is home to a large Mennonite community that emigrated to this region from Russia 90 years ago. Like many Mennonite communities throughout Latin America, they are in the beef and dairy business and will be key stakeholders in any conservation efforts.

The purpose of the TSA is to provide a sustainable alternative scenario to business-as-usual. We had originally planned a stakeholder workshop with the three largest beef and dairy cooperatives, who collectively own more than 1.5M hectares of land, as well as indigenous communities and government representatives. Unfortunately for our purposes, the UNDP international office had tweeted the previous week that eating less meat would reduce harmful greenhouse gas emissions. As you can imagine, this message did not sit well in Chaco, and the workshop was called off. Instead, the stakeholders agreed to participate in one-on-one meetings over two days. This meant more travel and more meetings for us but allowed us to meet the objectives of the trip.

We thought that we would be met with some resistance at these meetings, but that was not at all the case. We first met with senior staff from the Chortitzer cooperative who were eager to listen to our proposal. In a typical TSA, two scenarios are developed - the business as usual (BAU) and the sustainable ecosystem management (SEM) scenarios. One of the ranchers at Chortizer suggested an alternative name for SEM, Ganaderia Intelligente y Adaptada (GIA), which in English is Intelligent and Adapted Ranching. We shared this name with other stakeholders and it stuck.

At the meetings, we listened to the issues affecting their cooperative, including lack of business skills, rising taxes, and facing the legal requirement that 25% of their land be set aside as reserves. The reserve law was adopted in 1973 from a similar law in Brazil but has been more strongly enforced in recent years with new regulations. In addition to this 25% reserve, ranchers must provide franjas, which are natural corridors that make up another 15-20% of their land.

After two days of meetings, we had a reasonable understanding of the issues facing the communities and the cooperatives. The most important by far were the reserve requirement and the fact that the small ranchers didn’t understand how much it really cost to run their business or whether they were even making money. We proposed a follow-up meeting with all of the people we interviewed to share what we had heard and describe how our analysis will help them address these important issues and lead to a more sustainable future in cattle ranching. The meeting should take place in March. 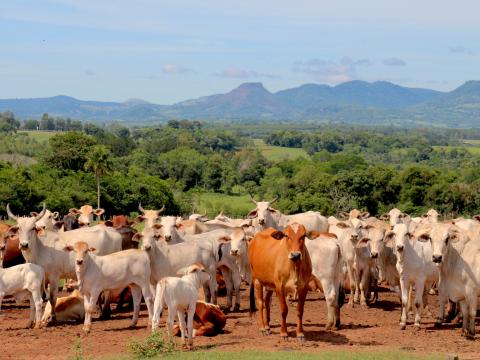