Why Rebuild BR-319? Economics of an Amazon Road 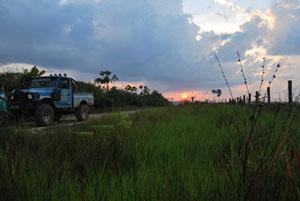 The route that once connected Manaus and Porto Velho is in a state of serious disrepair and has been impassable since 1986. The reconstruction of this route as part of the federal Accelerated Growth Plan (known by its Portuguese acronym PAC) has projected costs of R$557 million (US$265 million), which is that our analysis focuses on. Our analysis takes two scenarios: a “conventional” one, which reﬂects the approach commonly used in the evaluation of projects for road infrastructure, and an “integrated” scenario, which aims to incorporate environmental costs in the conventional scenario.

The integrated scenario leads to similar conclusions, largely due to the extensive deforestation predicted by recent models. Unless prevention measures of unprecedented effectiveness are implemented, deforestation costs could top R$1.9 billion (US$900 million) in present value terms. Overall, in this scenario, the losses of the project could go as high as R$2.2 billion (1.05 billion), or just 6.5 cents of beneﬁts for each dollar of cost. While our analysis does not consider the potential costs and benefits of proposed mitigation measures, the road would need to provide five times the benefits actually estimated to be economically efficient; this assumed that all potential deforestation from the project is stopped.

At this point, the available evidence suggests that this project is an inefficient use of Brazilian taxpayer's money and alternative projects should be considered.

The full report can be read here.