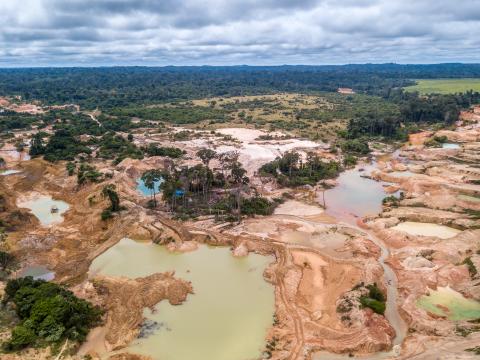 The Brazilian Federal Public Prosecutor's Office (MPF) is a government institution, independent of the three branches of government, that is responsible for both defending citizens against government abuse and for defending public property. In addition, the MPF actively promotes the development of a democratic society in Brazil, emphasizing the representation of minorities and disadvantaged populations. In particular, the MPF has recently taken a much more active role in combating illegal activities that result in negative social and environmental impacts, such as illegal gold mining. However, Brazilian prosecutors often lack the proper methodology to assess the financial penalties for individuals and companies that commit infractions related to illegal mining activities.

In response, CSF Brazil worked with the MPF to develop a "Mining Impacts Calculator" to estimate social and environmental damages from illegal gold mining. The MPF can now easily and efficiently calculate the estimated costs of illegal gold-mining activities and enforce stricter financial penalties for lawbreakers across Brazil. Looking forward, federal police will use the estimated cost of mining infractions to support court decisions for financial penalties, safeguarding citizens and communities from future mining threats. To learn more about this unique tool, read our news article on the calculator here, and the full paper in Portuguese here.

On a related but separate issue, a number of previously-banned pesticides have recently been legalized in Brazil, causing widespread concern about the consequences of increased pesticide use nationwide. To help the MPF better understand the risks posed by the increased use of pesticides in agriculture and farming, CSF Brazil conducted an analysis on the social and environmental consequences of increased pesticide use across Brazil, and held a seminar with the MPF  to review pesticide impacts and define next steps for protecting Brazil’s ecosystems.

In our study, the “Social and Environmental Costs of Pesticides and Valuation of Its Impacts,” CSF found that in 2018 alone, the potential costs for pesticide use in Brazil was more than 3 billion reals (BRL). To learn more about our analysis and findings, read the full news story here and the paper in Portuguese here.

Already, CSF's Mining Impacts Calculator is helping the MPF to secure victories in the regulation of mining activities, and defend communities across Brazil from the environmental threats of artisanal and small-scale gold mining (ASGM). Using the calculator, the MPF adjusted the economic impacts of one illegal mining company that had been closed down. While the impacts of the company’s activities were initially estimated to be around $74 million Reais, MPF agents updated these damage values to $1 billion Reais using our tool. In another operation, the MPF had previously estimated mining damages for one company to be $13 million Reais. However, using the tool, the MPF adjusted this figure to $268 million Reais to include social damages related to deforestation, erosion, and mercury contamination. As a result, the MPF was able to obtain a legal siege of the company’s property in a public civil action suit. To learn more about how the tool is already making a huge impact on the ground, read our news article here.