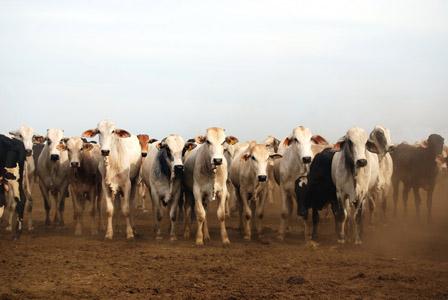 Cattle ranching is a leading cause of deforestation in the Amazon Basin. Forests are razed for pasture when landowners perceive that more profits can be made from cows than from the various products of the intact forest. This calculation is influenced by the availability of subsidized credit, long used a tool to drive economic expansion on the agricultural frontier.

CSF carried out two analyses to determine the past and potential future relationship between subsidies and deforestation. First, we analyzed the correlation between the volume of rural loans, which usually carry below-market interest rate, and deforestation in the southern part of the state of Amazonas over the last decade. Then we examined subsidies that would be necessary to convince landowners to restore degraded pasture to forest and to simply avoid cutting any additional areas of forest to accommodate their herds.

The first study found a close correlation between deforestation and the volume of credit from 1998 to 2009. The trend in credit followed deforestation with a lag of approximately one year. Between 64 and 96 percent of credit was given for activities that require deforested land. Avoiding deforestation by way of a subsidy to cattle producers would cost between 164-293 Reias (US$93-167 at an exchange rate of R$1.75 = $1.00). These figures are considerably above what carbon markets are estimated to potentially offer for avoided deforestation but less than the total economic value of standing forests, according to literature consulted.