Scenario Planning of West Papua as a Conservation Province 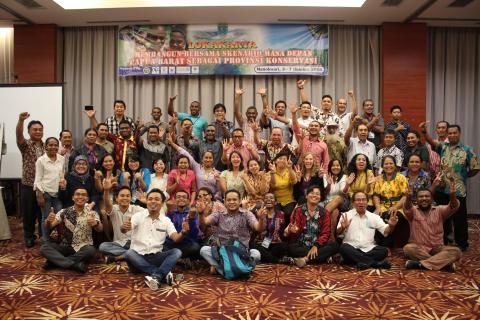 Through support from DFID/UKCUU, CSF Indonesia led a scenario planning process of West Papua in relation to West Papua having recently been established as a Conservation Province (Provinsi Konservasi). The purpose of scenario planning was twofold. First was to develop a comprehensive understanding of what the future may hold for the sustainability of development in West Papua. Second was to establish a well-rooted vision that the stakeholders of West Papua will choose as the vision for the future, based on the shared knowledge of key driving forces, the interplay among these forces and actors, and the directions the interactions may result on.

Sustainability was the central theme to the scenario planning, building a shared knowledge and understanding among stakeholders about the factors, players and impacts of their interactions to the future of development in West Papua. Vision, strategic plan, and investment policies rooted in the scenario planning process will direct the development of West Papua toward becoming a real conservation province.

The specific scenario planning activities were as follows:

The event discussed the biophysical, economic development, socio-cultural, and legal-regulatory situation in West Papua. The seminar was attended by more than 100 participants, primarily academics and government officials, and was supported by the Office of the Secretary of the Province.

Five background studies were conducted based on the inputs from the kick-off seminar, and included: (i) biophysical aspects of West Papua’s seascape, landscape and climate change issues; (ii) socio-cultural-political issues; (iii) economic development; (iv) analysis of development and spatial planning documents; (v) legal analysis of shifts of authorities in the light of change in decentralization and village laws in special autonomy context.

This workshop gathered 60 participants representing most of West Papua’s provincial and kabupaten government agencies, academics, and CSOs. The five day workshop was divided into three segments: 1) Scenario Development; 2) Converging Scenarios with Conservation Province Ideals; and 3) Bringing the scenarios into the draft of a special provincial regulation (Perdasus).

The workshop was dedicated to bringing into dialogue relevant professional planners and government staff from Bappeda (Provincial Planning Agency) and from the most relevant sectoral offices at the provincial level to look for opportunities for integrating the concept of conservation province into official development plans of the provincial government. This workshop was especially important, as it was the first formal introduction to the concept of conservation provinces for the attending officials.

Background on West Papua as a Conservation Province

On October 19, 2015, Abraham Atururi, then the Governor of West Papua, declared the province as a Provinsi Konservasi, or Conservation Province, the first in Indonesia. This includes a commitment to protect the environment of Papua for the sake of sustainability of the livelihood of the people of West Papua, to preserve biodiversity to maintain the ecological balance, to manage and utilize the natural resources wisely and sustainably, and to restore degraded environment and essential ecosystems.