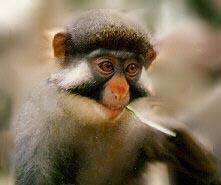 Researchers from the National University of Equatorial Guinea (UNGE) and Arcadia University have alerted the international conservation community to the threat of imminent extinction of the seven primate sub-species on the island of Bioko, Equatorial Guinea. These seven species include the drill, red colobus, black colobus, Preuss' guenon, crowned guenon, russeteared guenon and putty-nosed guenon. Similarly, researchers have pointed out the possibility of shortterm disappearance of the island's other large-bodied game animal, Ogilby's duiker.

In October 2002, Conservation Strategy Fund joined UNGE,Arcadia University and Conservation International to analyze the economics of wild meat on Bioko and determine what market and/or policy interventions would have the best chance of saving endangered wildlife on this island.

The CSF/Arcadia/UNGE/CI team relied on extensive data and local knowledge on bushmeat gathered by Arcadia and UNGE over the last five years, as well as a new survey of the island's hunters. New information was collected in all of the island's hunting camps. The study discovered that the economic importance of monkey hunting was very limited. Around 20 percent of hunting income for around 120 families was derived from the endangered primates. That means that the cost of providing alternative income opportunities would be extremely low, $41,400 per year to ensure survival of all seven species.