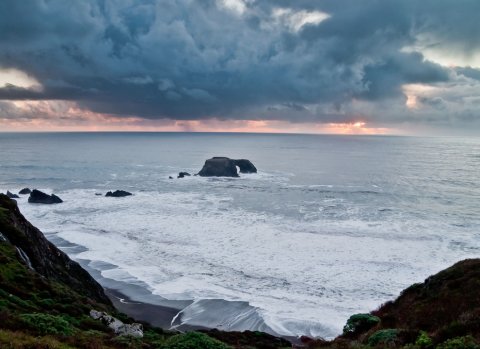 Abalone is one of the iconic species of the California coast and supports a recreational fishery enjoyed by over 30,000 anglers annually. Because of the abalone’s reproductive processes and lengthy juvenile period, overexploitation and other detrimental factors can have a long-lasting and potentially catastrophic impact on the population. The numbers of abalone on the coast of California have been declining in recent decades and, as a result, only red abalone may be fished recreationally and only north of the San Francisco Bay. In 2011 the red abalone of Sonoma and Marin Counties suffered from a red tide, an algal bloom that decimated the population. Since then, the California Department of Fish and Wildlife (CDFW) has implemented several additional regulatory measures to protect the red abalone population from further harm.

In partnership with the CDFW and the Resources Legacy Fund, Conservation Strategy Fund conducted an economic impact and valuation study of recreational abalone fishing to determine the species’ economic importance to anglers and to the coastal economy. To study the impact on coastal counties, we used the IMPLAN® model, which analyzes the inputs and outputs of the activity to determine direct, indirect and induced effects in the economy. The economic valuation from the recreationists’ point of view used data from surveys conducted by the CDFW and the database of abalone permit holders. With that information we conducted travel-cost and contingent valuation analyses, both of which calculate the non-market value of a recreational good or resource. The travel cost analysis examined total travel costs for each trip a diver makes and used this information to assign a monetary value to the resource. The contingent valuation method, in this particular case, looked at divers’ willingness to pay for better management of abalone, with an eye toward more robust populations in the future.

The results of this study intended to help inform the CDFW of the potential economic impacts that could result from a change to current regulatory measures. Furthermore, conveying the value of this resource in a tangible way could lend additional weight to the importance of conserving red abalone as people come to more fully understand the entirety of the species’ value to our communities’ economic wellbeing.