An economic comparison of alternatives to building a port on Goat Islands, Jamaica 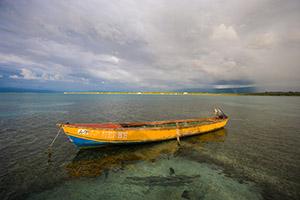 In 2013, Jamaica’s Ministry of Transport, Works and Housing announced that the China Harbour Engineering Company (CHEC) had selected the area on and around the Goat Islands to build a major transhipment port and accompanying industrial complex. Due to the location of the proposed site in the core of the Portland Bight Protected Area, reactions have been heated.

Building a port on Goat Islands requires that Jamaica accept a trade-off – sacrifice an area of outstanding environmental importance in exchange for development. CSF, in partnership with Critical Ecosystem Partnership Fund, the Caribbean Coastal Area Management Foundation, NIRAS Fraenkel LTD and Conservation Agreement Fund, assessed whether there are suitable alternative sites that could promote both objectives without imposing undue financial costs on the developer. Our findings show that there appears to be at least one such option: an equivalent facility at Macarry Bay, to the west of Goat Islands, would cost an estimated $200 million less to build. Considering a planned total investment of $1.5 billion, this represents a potential cost savings of more than 10%. Building at Macarry Bay would also impose a far smaller environmental cost.

While advocating that the new port be built at Macarry Bay specifically is beyond the scope of our study, findings strongly recommend that the selection of Goat Islands be reconsidered in light of appropriately detailed analysis of alternative sites.

The project used a Cost-Effectiveness Analysis (CEA) framework to address the question of whether alternative locations offer the potential to build an equivalent facility at lower cost. The CEA is driven by high-level port layouts for potential alternative sites, designed considering wave environment, geology, topography, and bathymetry. We use this information to design necessary breakwaters, as well as identify the composition and calculate the volume of material to be dredged, excavated, and used for reclamation. Cost estimates for these construction activities, based on multiplying volumes by different unit costs depending on the material involved, are used to calculate the total costs of the major construction requirements that differentiate the sites. We do not consider the cost of planned facilities such as the gantry crane assembly plant, whose costs will be roughly the same across all locations. Results are therefore given as differential, rather than total costs.

For developments at the scale considered, it is not possible to design facilities that are exact equivalents in everything but financial cost. We therefore extend the analysis to include quantifiable environmental damage, for instance related to lost fisheries production or opportunities for tourism development. We also describe and compare several major additional differences between the sites, including factors potentially relevant to both operations and to indirect benefits and costs to Jamaica.

Alternative sites considered include Macarry Bay, which offers potential to build a facility that meets the same size and other requirements specified for Goat Islands. We also consider an option that divides the required facility between two locations, with a transhipment port at Kingston Harbour and an industrial port and shore-side industrial complex on the eastern side of Bowden Harbour. The latter option was included based on the finding that neither site was suitable for the entire facility, but both offer advantages for the functions considered.

We consider a layout that is optimal for efficiency of transhipment operations and in terms of minimising environmental impact. The entire port facility is built on reclamation formed by sand dredged in the course of the construction of the port and its approach channel. It is connected across a narrow strip of swamp behind the beach by means of one or more short causeways to proposed industrial estates in the scrub area behind.

The design requires a large volume of dredging (70 million m3), both inside the port and to create the long approach channel. However the material to be dredged is confirmed sand, which is relatively inexpensive to dredge. The total dredging cost is estimated at $500 million. Significant reclamation is also necessary but costs per m3 are minimal due to possibility of using sand dredged from nearby as part of marine works. Two large breakwaters are also required, each over 20 m in height and having a volume greater than 2 million m3. These cost $250 million together. The total differential cost of this option is $931 million.

The total volume of dredging at Kingston and Bowden combined is approximately half that at Macarry Bay. However, the small amount of dredging required in Bowden Harbour (8 million m3) is likely to require removing soft rock at a far greater unit cost than dredging sand. The total estimated dredging cost in Bowden is $400 million. Most importantly, there is a key unknown cost in this layout related to the material underlying the proposed site in Kingston Harbour. Two scenarios are considered:

Scenario 1: The site is primarily founded on mud, in which case the dredged fill from the adjacent berths and channel deepening is unsuitable for use as hydraulic fill. The combination of imported fill and ground improvement is estimated to cost $850 million. Total differential cost of this scenario is $1.7 billion.

Scenario 2: The site is primarily founded on sand, in which case the dredged fill from the adjacent berths and channel deepening is suitable for use as hydraulic fill, with no additional soil treatment necessary. In this case, reclamation costs drop by nearly $700 million, putting total differential cost at $1 billion.

The proposed development on and around Goat Islands is the benchmark against which the two alternative designs are compared. The significant majority of cost comes from the need to excavate over 80 million m3 to level the Goat Islands to an estimated 7 m height, and to reclaim an area requiring a similar volume of material between and around the Islands to accommodate the proposed transhipment and portside industrial areas. The key unknowns in this case are the costs at which CHEC can expect to do the necessary quarrying, and the suitability of material dredged in the vicinity of the port for use as fill. Three scenarios are considered:

Scenario 1: Fill and armourstone is obtained from the islands at similar rates to those for purchasing equivalent materials from a local quarry. In this case, excavation and reclamation alone would cost ~$1.8 billion. Total differential cost is $2.1 billion.

Scenario 2: Fill is primarily dredged material pumped into position, but there is a cost for excavating necessary material from the islands even if not used as fill. There appears to be no scope for savings under this scenario given the need to level the Goat Islands regardless.

Scenario 3: Fill and armourstone is obtained from the islands at reduced rates. At 50% of the estimated commercial rates, reclamation and excavation cost an estimated $900 million, with total differential costs of $1.15 billion. Costs at this level would appear closer to those expected by CHEC given public statements that total investment will be $1.5. We cannot know the extent of possible cost reductions, but we note that calculating costs at this level may be optimistic.

Building at Macarry Bay appears to compare favourably to Goat Islands from a construction cost standpoint. An optimum layout at Macarry Bay costs $200 million less to construct than a low-cost scenario at Goat Islands. These differences are driven in large part by the need to excavate and fill areas requiring more than 80 million m3 of material including rock in the Goat Islands case, versus a Macarry Bay design that relies on less expensive dredging of sand and using it to reclaim land nearby. Furthermore, due to storm surge, locally generated waves, and an orientation that permits Trade Wind waves to enter Portland Bight, Goat Islands faces a more challenging wave environment than might be assumed based on location, while Macarry Bay is less challenging than would initially be assumed due to the prevailing direction of Trade Wind waves and a long, shallow foreshore that significantly reduces deep sea wave heights before they reach the port.

Furthermore, quantified environmental damage from building on Goat Islands is more than three times higher than that from building in Macarry Bay, $6.8 million compared to $1.5 million in present value terms. These estimates are only a partial accounting of ecosystem values; other values are excluded due to data and related limitations. Considering other relevant characteristics, Maccary Bay is superior to Goat Islands except with respect to its access to the road network and Kingston, and likely in terms of the need for maintenance dredging of the approach channel, especially after hurricanes. Macarry Bay appears better in terms of all other characteristics considered, including efficiency of transhipment port layout, ability to expand activities on land and deepen the access channel, environmental impact and local economic impact.

Building at Kingston/Bowden presents the obvious challenge of developing a split facility. However, the combination of sites may offer an opportunity to maximize benefit for Jamaicans from the port development, helping to further Kingston Harbour’s competitive advantage in transhipment and at the same time significantly improving connectivity between Kingston and centres of population to the east and Port Antonio to the north. If these gains are deemed potentially worth some complication in design, it would be a relatively simple matter to further investigate whether dividing the proposed facility between Kingston and Bowden is cost-competitive.

While this rapid assessment cannot arrive at absolute conclusions on the best choice for Jamaica’s expanded port infrastructure, our findings provide evidence to justify serious consideration of other sites, including Macarry Bay, as alternatives to Goat Islands. If more detailed investigations confirm these findings, Jamaica will be presented with the opportunity to build a new world-class port without losing a world-class conservation site.