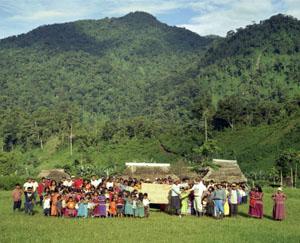 We analyzed four hydroelectric projects planed in Panama’s Bocas del Toro Province. All four projects would be located in the Changuinola-Teribe watershed, within the limits of the Palo Seco Protected Forest (known by the Spanish acronym BPPS). Three of these projects would be built on the Changuinola River, with the fourth on the Bonyic River. Both rivers have their headwaters within the Amistad International Park (PILA). The dams’ combined installed capacity would be 446 megawatts, equivalent to 30 percent of Panama’s total capacity at the end of 2004. Our analysis suggests that the projects would most likely be both economically and financially feasible. Nonetheless, they would cause environmental damage in an area of global conservation interest and impose serious hardship on indigenous communities living along these rivers.

The first of the three Changuinola dams is being constructed by AES, an American power company. AES applied for carbon credits under the Clean Development Mechanism to help finance the project. CSF submitted an official comment on the application, noting that we had found the dam to be feasible without carbon credits. Granting such "non-additional" credits increases the global emissions of greenhouse gases.