The ongoing collaboration in the Sustainable Sintang Initiatives has entered Phase 3 this year, and our sixth year of collaboration with the Sintang government on mainstreaming sustainable Sintang principles. As part of this initiative, Yayasan Strategi Konservasi Indonesia (YSKI, or CSF Indonesia) will conduct an inland fisheries assessment in a selected protected lake and analyze for the purposes of making management plans and area development proposals Sintang inland fisheries have a massive potential to be one of their main sustainable economic powers in the region, as they are located amongst four rivers, the Kapuas River (the longest river in Indonesia), and the Melawi River, the Ketungau River, and the Kayan River. These rivers have been providing the Sintang people with food, income, and a travel route to the cities and larger bodies of water.

On June 2nd, 2022, we began our initiative with a multi-stakeholder dialogue kick-off meeting, “Strengthening Sintang Food Security Planning Through The Inland Fisheries Governance”. The workshop was attended by the regent of Sintang, dr. Jarot Winarno, along with the 20 participants came from various institutions, such as CSOs, government institutions, and the private sector. This was the first of many platforms which enable local stakeholders to be actively involved in the strengthening inland fisheries management for food security planning on Sintang.

“Last week we launched a campaign ‘Gemar Makan Ikan’. Our fish consumption in Sintang in 2020 is 42 kilos per capita per year, ranking 8th out of 14 urban districts in West Kalimantan. We are still small compared to the national value. That's why we continue to campaign for eating fish.” - Sintang Regent Dr. Jarot Winarno's opening remarks.

The strengthening of the Sintang inland fishery sector will not only support the livelihoods of local communities and protect the ecological resources of its river system but could be a solution to eradicate the stunting problem that occurs in Sintang. Stunting is the impaired growth and development that children experience from poor nutrition, repeated infection, and inadequate psychosocial stimulation.

“..... so the inland fishing industry can be said to be bright from upstream to downstream. We are blessed with an abundant homeland, many lakes, and many rivers. So it is hoped that the development that we are doing together will not only stop at snakehead fish but is also expected to be able to carry out development and research on other fish. So the potential is there, we just need to process it to achieve adequate fish consumption. At least up to 50 kilos per capita per year. If that can happen, there will be no more stunting. In this meeting, it is hoped that a dialogue will occur which will result in cooperation for the sustainable progress of Sintang.” - added by dr. Jarot Winarno in his opening remarks about the inland fishery's contribution toward the stunting eradication in Sintang.

After the kick-off meeting, the CSF team visited Nangaketungau village to have a basic understanding of the ecosystem and social aspects of the inland fisheries in the area. The lake ecosystem is a floodplain area, in which the condition is highly influenced by the season. Based on a short discussion with local fishermen, they feel like their catch has decreased compared to decades ago. The team also had a discussion with the head of the village, Mr. Muin, in which he provide full support for the inland fisheries' better management.

In the upcoming years, together with the Sintang Government, YSKI (CSF Indonesia) will work closely to improve Sintang’s food security planning through a series of inland fisheries management plan activities. We believe that with this joint collaboration, CSF Indonesia will be able to support the government initiatives to embody Sustainable Sintang in 2030. 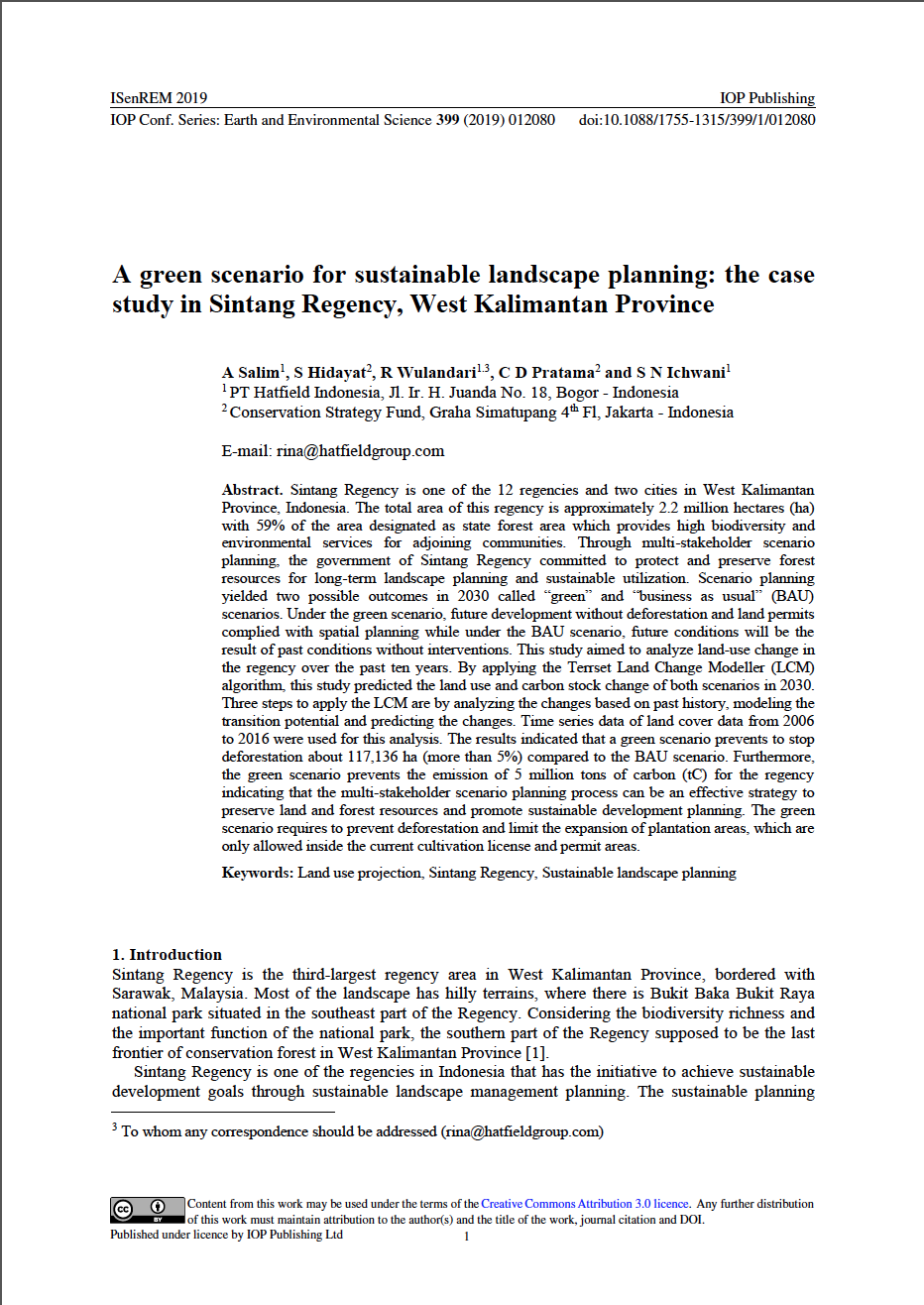