Fisheries Management Area Research: The Impact of Oil Spills on the Tourism Economy in FMA 711

Fisheries Management Area Research: The Impact of Oil Spills on the Tourism Economy in FMA 711

Ani Suryanti is a lecturer in the Fisheries and Marine Sciences Faculty at Raja Ali Haji Maritime University, chosen as one of our 2019-2020 Fisheries Management Area (FMA) 711 Fellows. Her research is to study the impact of oil spills on the tourism economy within FMA 711, which encompasses the Karimata Strait, the Natuna Sea, and the South China Sea.  Ani’s work is focusing specifically on Bintan Island in Riau Islands province, off of the central-eastern coast of Sumatra. Her study was motivated by the fact that oil is one of the most polluting substances to coastal and marine ecosystems in the world.  Oil spills on the Bintan Island coastline have damaged the marine ecosystem and affected tourism activity, underscoring the need to investigate and address this problem thoroughly.

Oil spills in Bintan Island are caused by several factors, such as oil tank transshipments, leakages from ships, industrial waste, and raw oil transport. Any oil that spills into the sea, either by accident or intentionally, spreads quickly to cover the water’s surface, causing harm not only to marine life but also to local communities.

Ani’s research found that Riau Islands is one of the biggest contributors to national revenue in the tourism sector, and at the center of Riau Islands tourism is  Bintan Island.  With a long coastline, pristine beaches, and rich marine biodiversity, Bintan Island offers a healthy ecosystem for both ecological and economic prosperity. However, being located in one of the busiest cargo ship channels in the world creates a challenge for the island. The first recorded oil spill accident occurred in 1997 when the Orapin Global supertanker and Evoikos tanker collided, spilling 25,000 tonnes of fuel oil into the strait of Singapore. In 2015, another collision took place between the Alyarmouk oil tanker and the Sinar Kapuas bulk carrier, resulting in a 33,000 barrel oil spill.  Both of these accidents severely damaged the island’s ecosystem.

Bintan Island tourism relies heavily on a healthy coastal ecosystem and clean ocean, which supports the marine life sanctuary and increases the touristic and economic value of the island. It is estimated that the cost to clean oil spills is around USD 300,000/ton off-shore and USD 29,000/ton for coastal areas, creating an enormous financial burden for local governments. The spills not only threaten the beauty of Bintan’s beaches, but also damage marine life, e.g. seagulls get caught in the oily water surface, fish die from consuming poisonous water, and reefs are smothered and killed from the oil. Although the cost of cleaning the spills is measurable, the costs of the damage to the marine ecosystem remain unaccounted for.

Oil spills can make it difficult for tourism service providers to predict their revenue since they rely heavily on a pristine and clean environment to attract tourists from all around Indonesia. In 2019, Bintan Island was struck 23 times with oil spills on the coastline. Ani’s research found the cumulative total losses to the five resorts on the island were IDR 2,354,073,167, or around USD 150,000, including cleanup expenses, room cancellations, and monitoring costs. These losses not only represent a reduction in current revenues but also threaten future Bintan Island tourism if the problem isn’t addressed adequately.

In February, Ani presented her research in the provincial capital, Tanjung Pinang. The event was attended by about thirty participants from the provincial government, various institutions, academics, civil society, tourism-business owners, police, and NGOs. Ani’s research has provided some essential information and economic justification for government efforts in addressing one of the main issues threatening Bintan’s marine ecosystem and tourism. Hopefully, this research will help spur increased efforts by the Riau Islands to tackle the threats of oil spills in the future.

Our FMA researchers will disseminate their work throughout 2020, and CSF-Indonesia will continue this collaborative research program into 2021 with additional FMAs.  This work is made possible by the generous support of  Margaret A. Cargill Philanthropies. 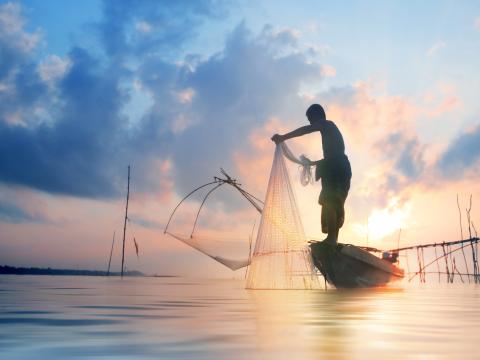