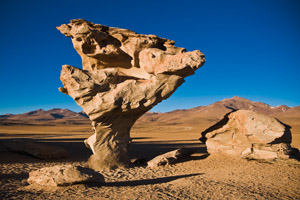 The Arbol de Piedra, or “Stone Tree,” is a lone 20-foot rock that has been sculpted by wind and sand to look like a resilient yet stunted tree. It’s a good metaphor for the tough life on the Andean high plains, and the icon of Bolivia’s Eduardo Abaroa National Wildlife Reserve.

The popular 1.7 million-acre park is often likened to Yellowstone for its mix of geysers, hot springs, moonscapes, and mountains. It draws roughly 80,000 visitors annually, but its vastness and isolation (650 miles from La Paz) make oversight difficult. Tailings from in-park mining sites and a lack of public facilities have contributed to park pollution. Visitors drive over fragile land. In surrounding communities, 99.4 percent of the population lives in poverty.

In 2007, Conservation Strategy Fund Research Fellow Paola Lozano set about discovering how much visitors would be willing to pay in entry fees if the park could upgrade its facilities and management. She surveyed hundreds of visitors, with eye-opening results.

Survey participants—most of them European tourists—said they’d willingly spend approximately 85 to 90 percent more money for a great park experience. In exchange for the almost $50 per day in extra spending, participants said they’d expect improvements to the park’s infrastructure, including better roads and hospitality services.

Paola advised park management that entry fees for foreign visitors could be raised from $4 to as much as $30 without significantly reducing their numbers. After some deliberation, her recommendation was accepted in 2010 and fees were raised to $20 for international visitors and kept at $4 for nationals. The 80,000 visitors that year were nearly identical to the 2009 numbers. The resulting five-fold gain in revenues in 2010 opened new possibilities for revenue-sharing with the local communities of Quetana Grande and Quetana Chico, whose income from the park multiplied by a factor of seven, to over $500,000 annually, while still increasing entry-fee income for park management to nearly triple its former total.

Paola’s story is just one example of how economic expertise can lead to environmental gains and an improvement in the livelihoods of those that call it home.

Since 1998, Conservation Strategy Fund has been committed to making conservation efforts smarter through the use of economics. To celebrate, we're going to be sharing 15 stories of success throughout our history. The above is story #6 on our timeline. To start from the beginning, click here. Continue the series with From Prison to Paradise